Pareidolia: Why we see faces in hills, the Moon and toasties 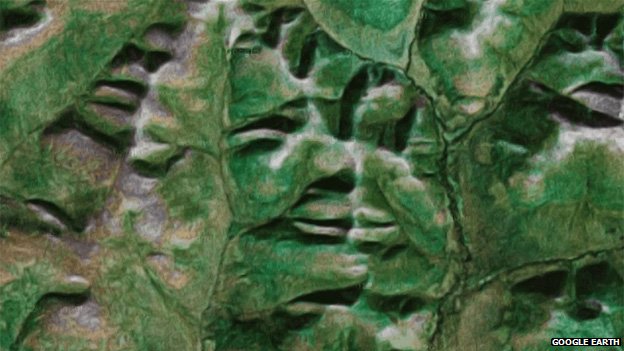 People have long seen faces in the Moon, in oddly-shaped vegetables and even burnt toast, but a Berlin-based group is scouring the planet via satellite imagery for human-like features. What's behind our desire to see faces in our surroundings, asks Lauren Everitt.

Most people have never heard of pareidolia. But nearly everyone has experienced it.

Anyone who has looked at the Moon and spotted two eyes, a nose and a mouth has felt the pull of pareidolia.

It's "the imagined perception of a pattern or meaning where it does not actually exist", according to the World English Dictionary. It's picking a face out of a knotted tree trunk or finding zoo animals in the clouds.

German design studio Onformative is undertaking perhaps the world's largest and most systematic search for pareidolia. Their Google Faces programme will spend the next few months sniffing out face-like shapes in Google Maps. 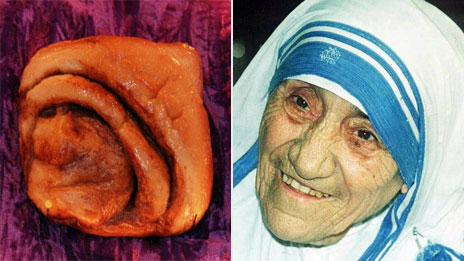 Google Faces will scan the entire globe several times over from different angles. So far the programme has pinpointed an eerie profile in Russia's remote Magadan region, a fellow with hairy nostrils next to Priory Road in Ashford, Kent, and a mangy creature in the mountains of Alaska, among others.

It's certainly not the first to uncover faces where they don't actually exist.

This week, US department store JC Penney sold out of a kettle thought to look like the leader of the Third Reich after the resemblance was noted on social news site Reddit.

A chicken nugget shaped like US President George Washingtonearned more than £5,000 ($8,100) on eBay last year.

A decade earlier, some 20,000 Christians travelled to Bangalore to pay homage to a chapatti with the image of Christ burnt on it. Some visitors even offered prayers to the glass-encased flatbread.

In 2011 a Tumblr site that specialises in finding things that look like Hitler posted a photo of a modest terraced house in Swansea. Its angled roof resembles a comb-over, and the moulding over the house's door is said to evoke the dictator's trademark moustache. 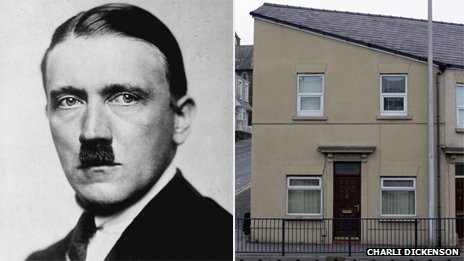 In 2009 the Allen family of Ystrad, Rhondda, spotted the face of Jesus on the underside of a Marmite lid. Instead of the usual mundane brown smears, they found a "comforting" image and saved the top after finishing off the jar.

And American Diana Duyser took a bite out of a cheese toastie in 1994 only to find herself face-to-face with what looked to her like the Virgin Mary. She noticed the Madonna's burnt image on the bread after the first bite and saved the rest of the sandwich for over a decade. 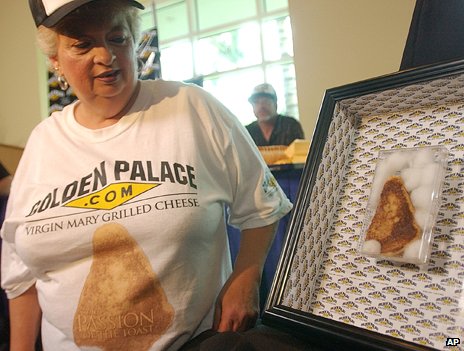 Diana Duyser and her holy toastie

After seeing the famous "Face in Mars" snapped by the Viking 1 Orbiter in 1976 and playing around with facial recognition technology, they became curious about "how the psychological phenomenon of pareidolia could be generated by a machine", Kiefer says. 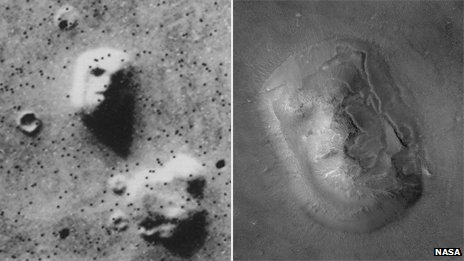 The Face in Mars photo from 1976, and a more recent close-up

They didn't expect their project to be a big deal, but soon their photos of faces in the Russian tundra and rural Britain were spreading across the web.

Seen a face? Send us your photo

When taking photos please do not endanger yourself or others, or infringe any laws.

"It seems like there is something fascinating about pareidolia," Kiefer says.

While some countenances resemble cartoon characters and abstract art, other images appear almost "too real to believe it's just coincidence", he adds.

But why do people see faces in what is quite literally nothing more than a stain, a splotch or a strange rock formation?

Some of that is our evolutionary heritage, says Dr Nouchine Hadjikhani of Harvard University. Humans are "prewired" to detect faces from birth, she says. 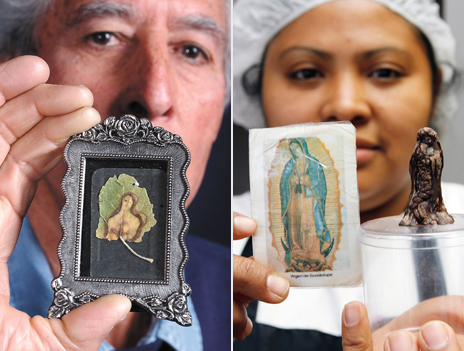 Mona Lisa or Virgin Mary on a leaf; and the Madonna in chocolate

And the tendency to pick out familiar figures goes back to the first humans, says Christopher French of the British Psychological Society.

"We've evolved brains that think in these quick, dirty ways that are usually right, but at times can lead us to systematically be biased," he explains.

"A classic example is the Stone Age guy standing there, scratching his beard, wondering whether that rustling in the bushes really is a sabre-toothed tiger. You're much more likely to survive if you assume it's a sabre-toothed tiger and get the hell out of there - otherwise you may end up as lunch."

Other experts say pareidolia is a consequence of the brain's information processing systems. The brain is constantly sifting through random lines, shapes, surfaces and colours, says Joel Voss, a neuroscientist at Northwestern University.

It makes sense of these images by assigning meaning to them - usually by matching them to something stored in long-term knowledge. But sometimes things that are slightly "ambiguous" get matched up with things we can name more easily - resulting in pareidolia, he says. 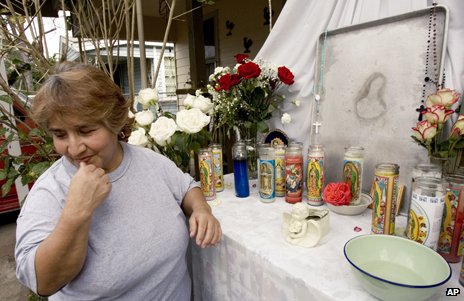 "Being able to see Jesus's face in toast is telling you more about what's happening with your expectations, and how you're interpreting the world based on your expectations, rather than anything that's necessarily in the toast," she says.

And once the Virgin's face or George Washington's profile are spotted, it's virtually impossible to unsee them, says Bruce Hood, author of The Self Illusion: How the Social Brain Creates Identity.

"That's one of the things about illusions, they have this remarkable tendency to formulate in your mind, and it's very difficult to unthink them," he says.

But simply spotting a face in a morsel of food or a fence doesn't explain why some people spend thousands of pounds to buy it or make a pilgrimage to see it.

Pareidolia can be extremely evocative - especially if a person believes in miracles, Scott says.

For some, pareidolia stands as evidence of the supernatural, Hood says. "People will seek out these sorts of things for some sort of intervention."

The object itself can also take on special significance, says French. People assume that if it has been divinely produced, then it has been "touched by God" and "will bring good fortune", he says.

But you don't have to be particularly religious to appreciate pareidolia.

"I don't for one minute think there's any kind of religious significance or anything else in them," French says. "But hey, they're pretty neat, aren't they?"

Seen a face in the clouds, on toast or a tree trunk? Send us a photo you have taken for a picture gallery. Email yourpics@bbc.co.uk with the subject line Magazine faces, or upload your photos here with the same subject line. If you submit an image, you do so in accordance with the BBC's Terms and Conditions.