Home > About Us > Opening a Snowtober Bust > How Gidge 3D Works

Bifocal vision and Chroma depth glasses are required for the vibrant 3D experience. 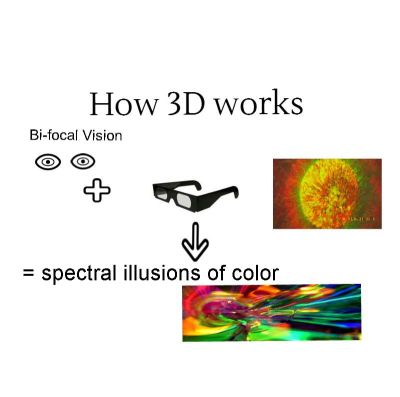 We send two pairs of Glasses with each painting.  The explainations on the web page from American Paper optics does not even begin to cover what Ken is doing with his fine  art technique which far beyond anything described thus far.  His fine art style which creates the holographic  effect is created by a confluence of color, layering , application, the viscosity of the paint and drying techniques.  When seen in person,  the viewer must have bi-focal vision and the CHROMA DEPTH GLASSES

Three dimensional art using a still image is generally considered to be one of the following:  computer generated graphics which can sometimes used to create sculptural art, Trompe l’Oeil or Fool the Eye street art usually executed in chalk, or stereo-optic visuals that require special glasses with a double image.

Distinctive from the above types of 3D work, Ken Gidge of Nashua, NH has developed a new form of three dimensional art, an abstract fine art treatment, first shown at the Chimera Gallery in Nashua, NH by Nancy Ferrier  on October 29, 2011.David Tiller, one of the early collectors and an avid fan, added the descriptive words “Spectral Illusions”.   Gidge 3D Spectral Illusions gives the viewer the impression that the shapes on the flat surface of the painting are projecting outward, floating in space or receding into the surface of the painting.  The viewer needs to look through Chroma Depth 3D glasses and have bifocal vision for the optical illusion to be perceived.

This innovation in art is not so much concerned with style elements or subject matter but rather by combining variables that generate the optical illusion of depth  or projection  from the surface of the canvas creating an exceptional image. Unlike other forms of three dimensional art , where the illusion of depth is created by manipulating perspective, or the layering of numerous images, Gidge 3D  Spectral Illusions are produced solely by the confluence of color, chromatic glasses and the viewer’s interpretation of what they are observing.   The critical factor is that the illusion of depth is created on a flat or two dimensional surface.

Ken Gidge considers himself to be primarily an inventor,  and incidentally an artist, although his work is considered by fellow artist Susan Marie Stevens, to be incredibly energetic and insightful.  With most pieces being  abstract in nature one can see Gidge’s use of design and texture, even if some of the textural qualities are subtle until revealed by the 3D viewing, creating a distinctly different flow of forms and a delightful play of color.  There are occasional excursions into figurative art, with images of fanciful fish or flowers possessing a stained glass appearance.