In this section : Theater & art

Mark Wilson for The Boston Globe

“I guess my life’s philosophy has been that there’s room in our lives for everything we love, simple and complex,” says Ken Gidge of his multiple pursuits.

Ken Gidge is a politician — a Democratic New Hampshire state representative who recently won reelection to his third term. And he’s an inventor, of refrigeration energy-saving devices and a plastic Frisbee-style toy called the Wing Wheel.

As a young man, he was a Santa Claus at a department store in Boston, and he spent 248 days atop a 30-foot-high perch at a car dealership in Peabody, Mass., going for the world record in flagpole sitting. He once self-published a book on what he believed then were his psychic abilities, and he’s an avid writer of poetry. He says he was a jazz club manager who gave Muddy Waters a gig at the start of the late bluesman’s US comeback tour in the 1970s.

Gidge has the bearing of a professor, and the look, too — wire-framed glasses, a well-groomed mustache, sport coats over golf shirts, and a constant smile. And it makes sense. A conversation with Gidge is almost always a lesson of some sort, with him playing the role of a happy teacher, thrilled to talk history, culture, and the joy of life itself, as well as share anecdotes about his own adventures. 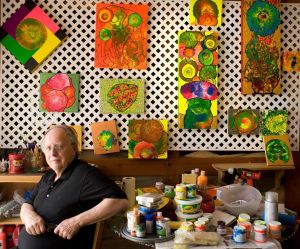 The latest display of Gidge’s eclectic talents comes “hidden” in his self-description as “just a guy who paints.”

Gidge’s paintings are bright, almost bawdy collections of heavily textured swirls and whirls. Some show brightly colored, featureless people. All, when viewed through 3-D polarized glasses, seem to come to life and leap off the canvas.

So far he has declined to reveal much about how he gets the 3-D effect other than to say, “It’s just paint and nothing more,” and “My technique is all about painting with mixtures that compel the naked eye to search for the depth, the 3-D element.”

Yanick Lapuh, an artist known for sculptural paintings that explore three-dimensionality, praised Gidge’s work as “amazing for someone who is self-taught.” Lapuh has exhibited in eight solo shows and more than 14 group shows, including shows at the Fuller Craft Museum in Brockton and the Peabody Essex Museum in Salem.

Examining two of Gidge’s paintings in his Brookline studio, Lapuh could not determine at a glance how Gidge achieved his visual-depth effect, and noted that Gidge’s technique “isn’t considered classic in the purest sense of the word, artistically, but who cares? It is complex. . . . I applaud him for this.”

Joseph Farbrook, associate professor of humanities and arts at the Worcester Polytechnic Institute, explained 3-D perception: “Eyes are like two different camera lenses,” he said, “and as an image moves closer to your eyes they start to cross a little bit. . . . A different image is created for each eye, and there is a point where the two images blend or overlay one another.”

Polarized glasses, which are needed to get the 3-D effect when viewing Gidge’s paintings, create a different image for each eye by presenting images to each eye from slightly different perspectives, depending on the shape or curvature of the lenses, Farbrook said.

However it’s done, Gidge didn’t just wake up one day and start working in 3-D. It took a colorful, meandering life to get to this point.

“You know, so many people have a story about childhood where they had a sudden feeling or an epiphany, or they experienced something that made them want to be an astronaut or a rocket scientist or an inventor, or rock star,” he said. “For me, it was just kind of gradual.

“Whenever I crossed paths with something interesting I embraced it, but I didn’t cut ties with whatever other interests I’d built. Plus, there’s so many things you can try once, things that are great and exciting and don’t necessarily take a long time. I guess my life’s philosophy has been that there’s room in our lives for everything we love, simple and complex.”

Developing his 3-D paint was complex. But after several months of tinkering, measuring, mixing, and brush-stroking in his home studio, Gidge found his “normal paint-only” 3-D formula and technique, and he emerged with a collection of paintings, ranging from 2-by-2-foot canvas numbers to wall-size works that all depict shimmering abstract starbursts that really could be stars or maybe flowers and those colorful gingerbread man-shaped characters that appear to be celebrating. They’re open to interpretation. And Gidge says that’s exactly as it should be.

“My paintings are a purposeful merger of color,” he says. “Just color. With the glasses and the brain’s own interpretation, they may look different to different people. But the depth, the 3-D quality remains.”

For Gidge his paint invention is just a beginning.

“I’d like to see how I can apply this sort of mixing and layering to sculpting materials too,” he says. “But first I plan to let the public know how to do it too. Again, why do this stuff if you’re not going to share?”

James H. Burnett III can be reached at
Twitter @JamesBurnett.