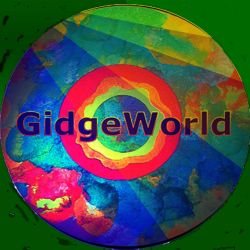 Three Dimensional Art first emerged publicly as an astonishing phenomenon when highly talented, skilled artists took their skills to the street then merged with and altered the cityscape. Suddenly, incredible, vast images were created within the public arena and a responsive and enthusiastic audience was immediate.

Alas, the downside of such works of art was that no matter how staggeringly complex, startling or magnificent the composition, it was stationary, non portable and could not be taken home to display. The audience came to the art.

Thankfully, the dimensional complexity of the 3D planes can be transposed to canvas by artists who are talented in the genre, such as American artist, Ken Gidge who is also an inventor.

A 3D painting is a visual challenge, an illusion created and carefully controlled by the artist.
The 3D artist has special knowledge, a heightened visual spatial awareness and specific techniques. Ken Gidge keeps secret his actual methodology and even the type of paint he employs.

The linear plane received by the human eye is manipulated by the artist as specific techniques are used. Desired results are achieved by the clever choice of color or hue and its deliberate application to obtain wanted effects in variation. A skilled 3D artist can make a particular color plane dominant or subordinent and even give an illusion of transparency.

Ken's art moves from bold and confronting canvasses such as 'Mitosis' and 'Emerge' to the hazy and translucent of which, 'Petunias on white' and Begger's Cross are examples. I consider Ken's works to be bright and beautiful in their 2D form. That is how I enjoy the painting I own.

However, visually via 3D glasses a 'Narnia' dimension can be accessed. The images mobilize as projecting or receding planes come alive. This inherent aspect makes these paintings an extraordinary gift and a platform for introducing children to art. In addition, the unique theme and properties lends itself to an entirely enchanting exhibition with everyone wearing 3D glasses.

In interview, Ken hints that there is more to be discovered and that the potential is unlimited.