Home > About Us > Opening a Snowtober Bust 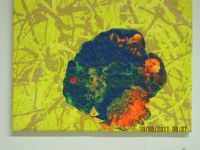 New 3D Paintings discovered by Nancy Ferrier
Nancy owner of Chimera Gallery in Nashua, is convinced that this style of painting in 3D is a new art form, a fine art treatment of 3D, which is enhanced by the Chromadepth glasses.

These POP optical Illusion paintings sometimes take on the appearance of brilliantly colored stained glass or layers of transluscent silk. Ferrier recalled an exhibit at the Boston Museum of Fine Art of Chilhoully which she says if these works were actually 3 Dimensional they would resemble. Originally inspired by Jackson Pollack , Ken worked for three years to develope an innovative form of art which was first shown in 2011 during a major snowstorm in NH, lovingly reffered to as Snowtober . At the first showing, no one showed up because of the 6 inches of slush on the roads which was early even for New Hampshire. Nancy and the painter's wife Lee ate the crackers and cheese, drank champagne, and got pleasantly tipsy and philosophical.

At the next show, one week later during the Nashua Art Walk a buying flurry ensued and over 12 painting were sold in a single day. The viewers were astonished by the interactive characteristics of the art. The reaction to the art appears in stages. At first the viewer is intrigued by the neon palette and beautiful design, next they are asked to put on the 3D glasses it appears that the holographic-like colors zoom out midair or sink into the wall. What they see defies the laws of physics and science. At first the viewer is amazed and how the colors project or sink into the canvas and then a pure childlike curiosity and delight arises. "Wow" , how does he DO that?

The viewer often spends several minutes dancing around the painting to get different angles and colors.The original Gidge 3D paintings are one of a kind and cannot be engineered to produce an identical piece. Although you cannot perceive the optical illusion on line, sometimes called spectral illusions, we promise that with bifocal vision and chroma depth glasses you will be delighted, intrigued and mesmerized. Ken's Gidge 3D style is singular and depends on variables in the application and execution process. It is an unusually hard medium to control and depends a great deal on serendipity.

What a hit you'd make at the next party as people gaze at your new artwork with the glasses.   Cocktails and 3D glasses anyone?